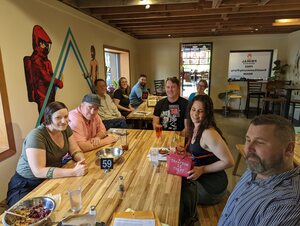 With your generous donations we've setup the Multnomah Libertarians Political Action Committee to put our ideas, the libertarian position into voicing opposition to the worst things in the County: tax increases & encroachment on property rights.

Whether you are just signing up to learn more or becoming a member of the Multnomah County Libertarian Party, thanks for taking the first step toward making a difference to shrink the government and increase personal freedoms. Thank you for you interest in libertarian action in Multnomah County.

Or Join the Libertarian Party of Oregon Meetup.com Group

Multnomah Libertarians will meet at Dick's Primal Burger at 2pm on the following dates for balance of 2022:

Who We Are: Multnomah Libertarians are currently a LP of Oregon affiliated organization seeking County Party status with the Libertarian Party of Oregon, and we have the support of the State Party in this effort. We are the local LP of Oregon affiliate in the Portland Metropolitan area. We will eventually become an official County Party (which will be called the Libertarian Party of Multnomah County) by following the procedures laid out by the State Party: lporegon.org/affiliates/policies/

In order to meet the requirements of the State Party, we need to hold an organizing convention attended by at least 16 Multnomah County registered Libertarian voters. We have proposed bylaws ready to go, and are hosting monthly meetings (in person & remote) and coordinating political action and social events in hopes we can get 16 registered Libertarians in the same meeting at the same time and host an organizing convention.

Dues: It is our intention to set a modest $20-$25 annual dues requirement when/if we become a County Party.

Libertarian Party of Multnomah County PAC We are currently establishing a Political Action Committee with the Oregon Secretary of State, organized as a “Miscellaneous PAC.” We are affilaited with the LP of Oregon. We are in the process of converting the PAC to a Political Party PAC. The priority use of funds for our PAC in 2022 will be to place measure arguments in the November 2022 Voter Guide, which currently cost $400.00.

Oregon Political Tax Credit: Political donations up to $50/year are eligible for a state income tax credit. So instead of writing a check to Salem, consider writing it to our PAC.

The Libertarian Party of Oregon (LPO, lporegon.org) (the “State Party”) is a recognized minor political party in the State of Oregon and the entity responsible in the state for Libertarian ballot access. All partisan nominations for public office go through the State Party, which also conducts and finances closed primary elections. The State Party hosts regular monthly board meetings online, and you are welcome to attend. The State Party does not currently have a dues requirement.

Nominations/Endorsements: The State Party is responsible for nominations; however, if we become recognized as a county affiliate, we would be able to recommend nominees for races where nobody was nominated in the State Party primary. Among our activities will be making endorsements or opposition endorsements of local measures and proposed legislation.

The Discord Server: Much Oregon Libertarian activism and party business/debate takes place on a platform called “Discord.” For access, contact Will Hobson via the link on the State Party website at lporegon.org/social-media. When registering, the convention is to put your real name followed by county: First Last (Multco). Discord is un-moderated and sometimes political debate can run hot. We recommend turning off notifications for most channels.

Other Caucuses: The Libertarian party has other caucuses including the Sober Caucus, Radical Caucus, Waffle House Caucus, and Classical Liberal Caucus. You can even form your own caucus. Getting to know fellow members is the best way to find if a caucus might be right for you.